The A/D Line is calculated by starting at 0 (zero) and accumulating the difference between advancing issues (A)Â minus declining issues (D) within the index or ETF, in this case the S&P 500 Index.Â  A very simple calculation, but one that is very seasoned and highly regarded. 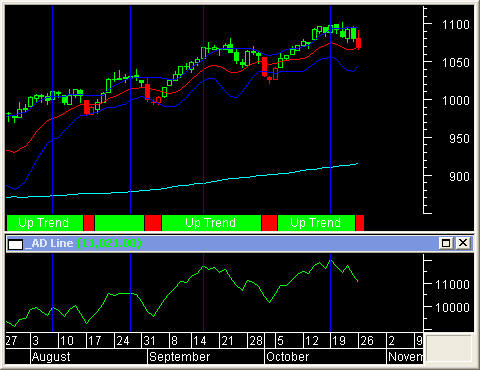 One way it is used is divergence.Â  Divergence is one of my least favorite measures of what a composite like the S&P 500 Index might be doing, but if you followed it in the example above you would be a very happy camper.Â  The idea is that when the index makes a new high, the A/D Line also must be making new highs.Â  If not, then that is a sign the price moveÂ might beÂ breaking down.Â  The chart above shows no divergence since July of 2009.Â  So if you were long the index, this indicator says you should still be long and only now as the A/D Line may be rounding off should you be alert to possible declines.Â  Divergence (or lack of it in this case) says the up move is still place.

Since this chart only shows a lack of divergence, here is an example from Steve Achelis of MetaStockÂ showing divergence:Â

“The DJIA was making new highs during the 12 months leading up to the 1987 crash. During this same period, the A/D Line was failing to reach new highs. This type of divergence, where the generals lead and the troops refuse to follow, usually results in the generals retreating in defeat as happened in 1987.”

“A military analogy is often used when discussing the relationship between the A/D Line and the DJIA. The analogy is that trouble looms when the generals lead (e.g., the DJIA is making new highs) and the troops refuse to follow (e.g., the A/D Line fails to make new highs).”

The quarterly revision of the MasterDATA Compilation List is now complete and again reflects the top 111 trade volume ETFs.Â  Subject to our inclusion criteria, this listÂ is revised quarterlyÂ toÂ reflect the most highly traded, liquid US equity Exchange Traded Funds.

To review all of the additions / deletions to MasterDATA’s Compilation List since the beginning, click here or on “Compilation List Revisions” in the left column under “Categories”.

Click on the Index or ETF names below to see breadth charts on that issue.Â  These charts and indicatorsÂ are available nowhere else on the Internet.

Deleted ETFs:
The deleted ETFs below experienced trade volume less than the top 111 ETFs at the end of the quarter.